skip to main | skip to sidebar

The Crusades, and Anti-Jewish Myths

*
The Crusades, 1096 - 1272
ON THEIR WAY TO JERUSALEM the crusaders left a path of death and destruction behind in Jewish communities along the Rhine and Danube "because," they are recorded as explaining, "why should we attack the unbelievers in the Holy Land, and leave the infidels in our midst undisturbed?"

On May 25, 1096, about 800 Jews were murdered in Wurms, Germany while many others chose suicide, Kidush haShem, rather than subject their families to torture, rape and murder at the hands of their tormentors. In Regensburg Jews were thrown to their deaths into the Danube, a "baptism" as entertainment for the mob. In Mainz, Cologne, Prague and many other cities, thousands were killed and their possessions plundered. During the nine crusades spanning nearly 200 years tens of thousands of Jews were massacred, thier property pilaged.

The Crusades marked also marked a dramatic change in the lives of Europe's surviving Jews, their second class status entrenched in Church dogma and state laws. Thus began a long period of persecution, expulssion and murder which only began to abate with the gradual secularization of Europe in the 18th century, with the appearance of the Enlightenment.

The crusaders embarked on their journey to liberate Jerusalem by attacking and murdering the enemy "at home," the Jews. Whole communities were destroyed, many Jews burned alive in their synagogues where they sought refuge. Suicide, forbidden under Jewish law, became the death of choice for those facing murder at the hands of crusader mobs. Suicide became Kidush haShem, in sanctity of the Lord.
* 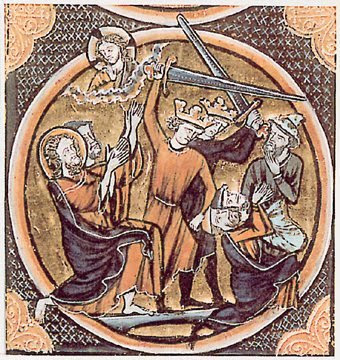 French bible illustration of 1250 depicts Jews (identifiable by the Judenhut, the "Jew hat" men were forced to wear to distinguish them from Christians) being massacred by crusaders during the First Crusade, 1096 CE.

********
Anti-Jewish Myths
IN THE MIDDLE AGES, belief in miracles and legends was common. Two myths with an anti-Jewish character appear throughout Europe, the Desecration of the Host, and the Blood Libel. Both survived at least into the 20th century. Anther popular belief that also survived into the 20th century was that Jews possess horns and a tail, give off a characteristic sulphuric odor, all attributes of the devil, their father assigned by Christian tradition.

ACCORDING TO THE BLOOD LIBEL charge, Jews murder Christian children to satisfy the need for their blood in the making of Passover matzot, and for other religious rituals. While some church and state authorities opposed the superstition the myth survived,supported and encouraged by local clergy. The blood libels perpetuate the myth of the evil and inhuman nature of Jews, serve to incite believers to take bloody revenge. Allegations of ritual murder also survive at least into the 20th century, inspiring pogrom in Russia and providing a topic for German war propaganda.

The "martyrdom" of Anderl

The above illustration, located at the cult-church of Anderl von Rinn until recently, portrays the "martyrdom" of Anderl, a three year-old boy who became the focus of a blood-libel cult in the seventeenth-century. Anderl is the child being held down and having his throat slit. The killers are clearly marked as Jews by their clothes and turbans (one form of the "special mark" Jews were forced to carry by Church decree). The third, lower, figure is collecting the child's blood in a bowl. The myth of the blood libel was that the blood of a Christian child was used to make Passover matzohs. Note that, as Prof. Schafer recounts below, this cult was allowed to continue in Austria until the 1990s, when Bishop Reinhold Stecher had the images removed.

The text of the motto reads: "Sie schneiden dem Marterer, die Gurgl ab und nemen alles Blut von Ihm", literally "they cut throat of the martyr and take all blood from him" or in other words, "They cut the martyr's throat and drain all his blood."

The story connected to the above picture was recorded by the German folklorists, the Brothers Grimm, in the early nineteenth century. What follows is my translation of the story.

In 1462 it so happened that in the Tyrol, in the village of Rinn, several Jews persuaded a poor farmer give up his little child, by paying him a lot of money. They took the child out into the forest and in the most horrible manner, martyred him there on a big stone, which is ever since called the "Judenstein" ["the Jewry-stone"]. The dead corpse they hung on a birch tree standing near a bridge. Now, the mother of the child was working in a field as the murder happened, and at once her thoughts turned to her child and without knowing why she became very afraid, and then, one after another, three fresh drops of blood fell on her hand. Full of anxiousness she hurried home and sought after her child. Her husband led her into the room and confessed what he had done. He wanted to show her the money which had released them from poverty, but it had all transformed into leaves. Then the father lost his mind and died of grief, but the mother went out to look for their little-child, and when she found it hanged on a tree, took it down with hot tears and carried it into the church in Rinn. And still the child lies there and is viewed by the people as a sacred child. The Judenstein was also brought there. It is said that a shepherd chopped down the tree on which the child had hanged, but when he wanted to take it to his home, he broke a leg and had to die.

"The murder of Simon of Trent by the Jews,"

is one of the most notorious accusations of alleged ritual murder against the Jews. After a fanatical Franciscan in Trent, Italy preached against the Jews before Easter, 1475, the body of the child Simon was found near the house of a Jew. All Jews of the town were arrested. After being tortured for 15 days, 17 "confessed." Eight were executed immediately and five later. Simon was beatified and venerated as a martyr until the Church finally withdrew the cult in 1965.

"They Martyrdom of Simon," by a thirteenth century Flemish poet

And when they had stripped off his clothes,
The dirty Jews, the stinking dogs,
They inflicted many wounds on him
With daggers and knives
And then, still in the same place, caused
All of the blood to flow from his body
And collected this blood in a vessel.
They did this
Because with this blood, I know,
They wished to celebrate their sacrament;
For it was their custom, and this is no lie,
To obtain a Christian child every year
young, healthy, and rosy,
This child they put to death
In order to have his blood.

June 9, 2008: Little St Simon of Trent was mercilessly martyred in the 15th century in Italy by Ashkanazi Jews.

“This two-year old child from the Italian town of Trent was kidnapped by a few Ashkenazi Jews from his home on the eve of Passover 1475 AD. At night, the kidnappers murdered the child; drew his blood, pierced his flesh with needles, crucified him head down calling “So may all Christians by land and sea perish”, and thus they celebrated their Passover, an archaic ritual of outpouring blood and killed babies, in the most literal form, without usual metaphoric “blood-wine” shift.”

During Vatican II:“the Church leaders had found the Jews free from guilt for Crucifixion of Christ while admitting the Church’s guilt for persecution of Jews; the crucifixion of an Italian baby was a small matter compared with this reversal. In a hasty decision, the bishops ruled that the confessions of the killers were unacceptable because obtained under torture, and thus the accused were innocent, while the young martyr was anything but. His cult was discontinued and forbidden, and the remains of the martyred child were removed and dumped in a secret place to avoid resumption of pilgrimage.”

God forgive them for this terrible thing. May we do all we can to honour little St Simon of Trent and revive his cult!
St Simon of Trent Pray For Us.
*
********
Desecration of the Host
*
In the year 1215 the church introduced the doctrine of the host (bread) representing the flesh of the Lord, and wine being His blood. Soon after rumors began to spread that Jews were stealing and mutilating the host in order to again kill Jesus. The belief that mutilation of the host results in bleeding (see illustration below) was supposed to prove the truth of the Christian faith.
Two from a series of six panels depicting the Desecration of the Host, by Paolo Uccello, Italy, 1465. Panel 1: A terrified Jewish family watches as soldiers break down the door to their home because the father, referred to as a "userer," is burning a "host." 2: The family are burned at the stake for the crime.
* 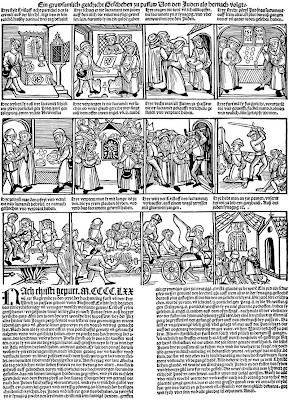 From a 15th-century German woodcut of the supposed host desecration by the Jews of Passau, 1477. The hosts are stolen and pierced in a Jewish ritual; they are recovered, and shown to be holy. The guilty Jews are tortured with hot pincers, then beheaded. The entire community is driven out. In the final panel the Christians kneel and pray. 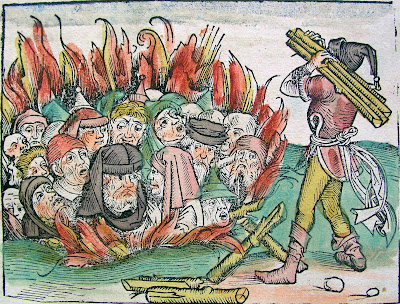 Because Jews were less susceptible to the Black Plague than their neighbors (likely the result of Jewish ritual regarding personal hygiene), Jews were accused of poisoning Christian wells, were thought to be the source of the plague. As this image illustrates, Jews were expelled, tortured and murdered for the "crime."

Monks, disfigured by the plague, being blessed by a priest. England, 1360–75 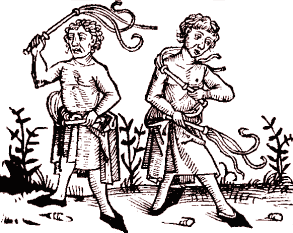 Flagellants practiced self-flogging (whipping of oneself) to atone for sins. The movement became popular after general disillusionment with the church's reaction to the Black Death.

Inspired by Black Death, Danse Macabre is an allegory on the universality of death and a common painting motif in late-medieval periods.

The burnings of Hebrew books were initiated by Pope Gregory IX. He persuaded French King Louis IX to burn some 12,000 copies of the Talmud in Paris in 1243. The Church and Christian states viewed the Talmud as a book hateful and insulting toward Christ and gentiles. Such burnings continued at least until the mid-17th century and nearly succeeded in stamping out Jewish books entirely. With Johann Gutenberg's invention of the printing press it became impossible to keep pace with their production. But public burnings continued, in 1553 and 1568, for example.

The Trial and Burning of the Talmud

In 1239 Pope Gregory orders the Talmud to be put on trial because it allegedly contains lies. The Talmud is ordered confiscated and burned. 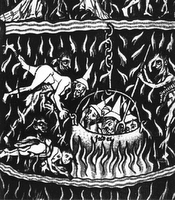 Jews are seen burning in hell in a medieval German manuscript. The devil is on the right. The inscription on the cauldron reads "Juda," Jews.

David Turner
was born in New York City in May, 1939, six months after Kristalnacht, Germany's massive pogrom against the Jews, and six months before the SS issued and executed the first orders singling out Polish Jewry for death. Of the more than six million Jews murdered by Europe in the years 1939- 45, more than one million were children. Had the parents or grandparents of Jews surviving today not fled Europe before the war; had Germany won that war it came so close to winning; had Hitler's idol and American industrialist Henry Ford decided to run, and won his anti-Semitic populist campaign for president of the United States would even a single Jew be alive in the world today? For David Turner Auschwitz is ever present. He sees himself not as just another American artist who matured in the shadow of The New York School; nor just an artist who happens to have been born a Jew. David sees himself, as he views every Jew alive in the wake of the Holocaust a child of Shoah. It is this awareness that defines his life, drives his work.